Let’s face it. The “World’s Most Popular Fantasy Roleplaying Game” was more influenced by Tolkien than Robert E. Howard. So, the first step many folks take when trying to do a Sword & Sorcery game is just “D&D with just humans.” For me, Sword & Sorcery is about attitude and atmosphere. 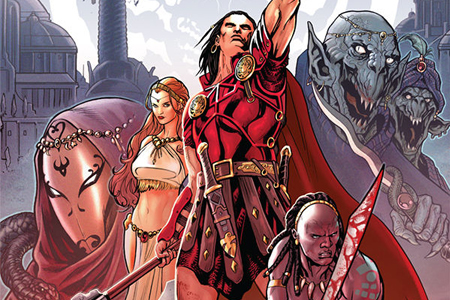 It needs to be sex, drugs and rock & rock. It’s heavy metal and punk rock all rolled up into one big crazy world. It’s twisted magic and monsters. It’s lost temples, forgotten gods and scoring that one big pile of loot before you die. Sword & Sorcery stories are about mean streets, wastelands and corruption. In a way, S&S has a lot in common with cyberpunk. I’ll let that one inspire you for a moment. 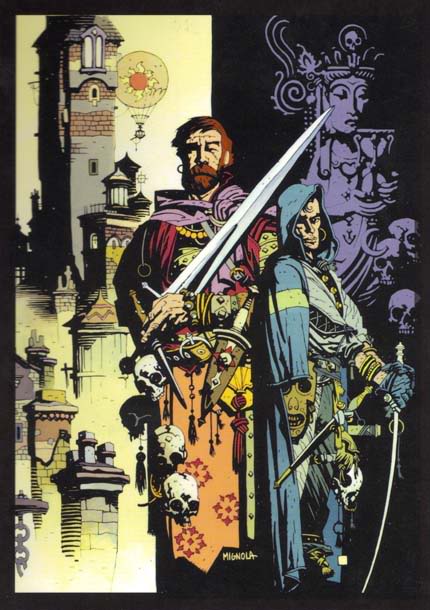 But here’s some elements that are bouncing around in my little head for some house rules for Crypts & Things. Yep, there’s going to be follow up posts as soon some more of these ideas start come together.
Humans Only. Sticking with that but doesn’t mean that it has to be bland. Humans from different cultures and lands will have slightly different skills. So just because everyone is human doesn’t mean that they are all the same.
Classes. The heroes of S&S stories have checkered pasts and a wide variety of skills. Classes can have their niche but characters need to flexible to survive. The two little keys here are no weapon and armor proficiencies and let the characters try anything. Plus throw on a level cap. I’m considering doing something along the lines of E6 for Crypts and Things. Just make an additional chart similar to the background chart. When a character “levels up” past sixth level, they roll and gain a new bonus.

Magic is dangerous and corrupting. The first thing, Vanceian magic is right out the window. Magic isn’t flash and bang. It’s creepy. It’s about how big a price someone is willing to pay for power. This is a major tweak and well worth it’s own post.
Monsters should be unique, twisted and frightening. It’s not a horror game (although there elements there) but players shouldn’t be yawning and saying, “It’s another shambling mound.” 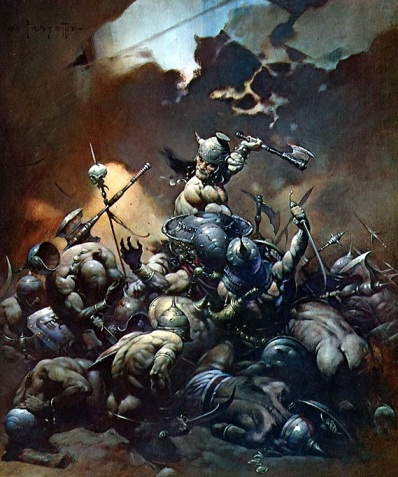 Combat is freaking dangerous. Hit points are cool and easy but with Hit Dice, the numbers can just end up too big to keep things gritty and dangerous. So here’s my little idea. Hit Points equal Constitution+ (1/2 Strength). That’s it. It doesn’t matter how many levels a character has. Getting a sword in the gut in a back alley brawl could it end it just as quickly as facing an other worldly horror. Now is the time I bore you with some math. Let’s say we’ve got a character with average stats of 11. That means 16 HP. At low levels, that’s a good chunk of HP but once you get around 4-6 not so much.  Also, there really shouldn’t be “heavy armor”.   I don’t see S&S characters running around in clunky plate mail.  Probably, chainmail at the best. And I know somebody is going to make a chainmail bikini comment.  Correct, it really isn’t armor. Neither is a fur lion cloth. 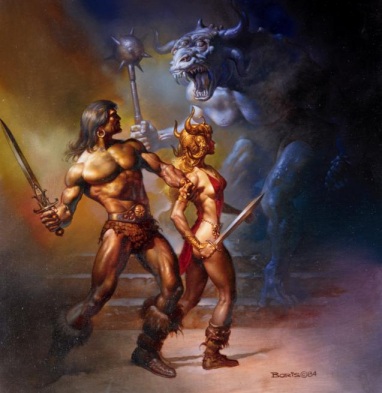 I usually don’t load a post with so much artwork but like I said at the beginning it’s about atmosphere and attitude. And a picture is worth a thousand sword cuts.