So I admit that I watched Madagascar 3 this weekend but being the insane guy that I am I thought about the first movie and the Foosa. I’m not making that name up. It’s a real animal. But a little deeper digging turned up some myths about it so the obvious response is to make it a monster. Of course this isn’t about the real animal but something that just dug it’s way out of my imagination. 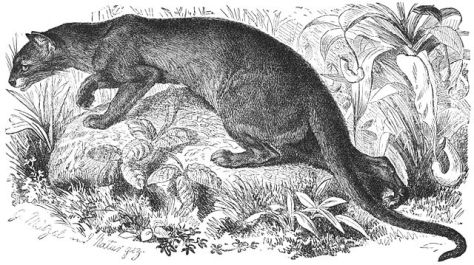 The fossa is an aggressive and cunning predator. They have been known to kill livestock and even stalk humans but this mainly for sport. Their preferred diet is to scavenge the flesh from freshly buried corpses. There are rumors that a scratch from a fossa can turn a human into a ghoul.
Armor Class: 6 [13]
Hit Dice: 3+2
Attacks: 2 claws (1d4), 1 bite (1d8)
Saving Throw: 14
Special: Paralysis, Ghoul Fever
Move: 12
Paralysis: Any hit from a foosa requires a saving throw or the victim becomes paralyzed for 3d6 turns. Elves are not immune to this.
Ghoul Fever: Any character who has been paralyzed by a foosa and survived must also make a saving throw or be turned into a ghoul in 2d6 days. A Cure Disease spell will cure this condition.
Enjoy.