Yes, I know this is old news but I figured I’d spread the word again. Free Games!

I played Star Frontiers once when it came out. I don’t remember much about it but my interest is renewed in old school that aren’t based the “World’s Most Popular Fantasy Game” plus I’ve space opera stuff bouncing around inside my head for last few days but more on that later. The most important things is that you can pick up the PDF’s of Star Frontiers over here for free. Plus check out the fanzine that is still going strong. It’s a solid system so just check it out. 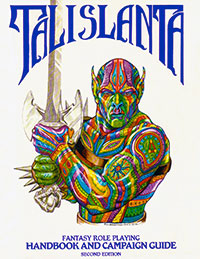 The second game I want to mention is Talislanta. The creators have posted the entire library and it is a big one. I admit that I have never played Talislanta but still have fond memories of their “Still No Elves” ads. It’s a pretty interesting system and players of d20 based games shouldn’t have that much of problem learning it. The big thing and I mean the really big thing is the amount of races. There are a lot. Even if you don’t actually play or run it, there is enough material to be really inspiring. Fear not breaking the “Human, Elf, Halfling, Dwarf” mold. It’s OK to play fantasy without. Just at Talislanta.
So old news about free games. Check them out and play them. Enjoy them.