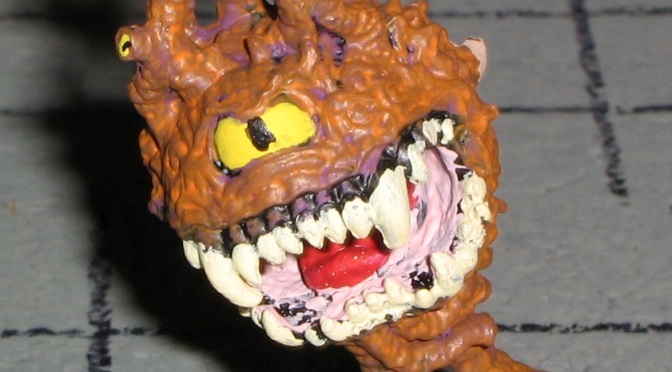 Well, my painting skills aren’t getting much better. Looks like the old eyes and unsteady hands have caught up with me. But no bother. It’s just one of those things you have to accept and move on. I used the long weekend to finally get caught on the last few Bones that I picked from the FLGS (I already bolder the ranks of my orcs). I mean crap. I realized that I didn’t have a single Beholder mini. Imagine that. SO I had to add this iconic monster to the inventory.
Also I grabbed up the the Evil Altar and the Well of Chaos. I really wish there more mini’s for dungeon features. Tables, altars, doors, or whatever. Those would be damned handy. I’ve seen a few Kickstarters but dang they just seemed too expensive for little pocket book. But hey looks there’s more goodies like these from the Bones II Kickstarter so I’ll be picking those up in a few months when they hit the FLGS. And speaking of picking up at the FLGS, there’s a few Bones I need to pick up. I don’t seem have a Purple Worm……and mummies. I need more mummies.