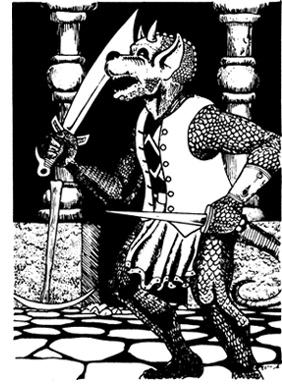 I dunno. Maybe it’s just me that it seems that Kobolds have become almost a joke. At least not as bad, goblins. Thank you, Pathfinder.
If you’ve been around the D&D block for a while, you’ve probably heard of Tucker’s Kobolds. This is one of those things that’s been kicked around, screamed at, and hand wrung over. For the link weary, it boils down to this. Even a low HD monster with intelligence, tactics, traps, and on their home turf can cause major problems for a higher level party. Some call it mean. Some call it unfair. Oh, well. But then in a harsh dungeon environment, how else are these little guys going to survive?
So yeah. Make them cunning trap builders with a knack for guerilla tactics and big streak mean. And that big streak of mean is where I’m heading in the post. Remember way back when and Kobolds were little evil dog-like creatures. Good. Now have you ever had a little dog? We’ve got one. He’s a little 16 pound bundle of “I ain’t taking shit off anybody”. Now I’m not saying he’s not a nice dog. He’s great and friendly. But he ain’t scarred of anything. Yes, I know that’s can be dangerous. That’s why he’s always on a leash. But I digress. Back to Kobolds. They’re little but they don’t care. Sure they’re little but their also supposed to be smart. So they just might have a bit a Napoleon complex when comes to dungeon intruders. A streak of vicious bravery especially if they get cornered. No cowering.
So in summary. Kobolds. Devious trap makers. Guerilla tactics experts. And what ever you do, don’t corner them.