So at last week’s game I mentioned Erik the Viking and no one at the table have ever seen the movie.  Then I did a little post on MeWe and there was a little a discussion and then I started thinking even more. And like always that’s where I get into trouble. 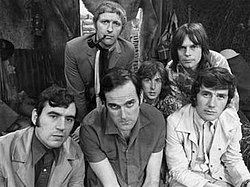 Heck, there’s the famous Appendix N that lists all of the literary inspiration for D&D. But let’s face it. The Pythons entered into the crazy banter that went into the actual playing of the game. So much so that it could be considered a Trope and a meme.

I know some folks absolutely hate that. That’s OK. But then I’m always the sort of person that interjects humor into every game whether I’m running or playing.  Yeah, I’m the joke guy.

Oddly enough, there just might be a reason for this.  Let’s see original D&D was released in 1974.  Guess what year Monty Python’s Flying Circus hit PBS?  That’s right same year. Around the same time (1978), Dr Who hit PBS.  I remember the old PBS stations of my youth blocked all the British shows together so Flying Circus and Dr Who were back to back.  So I’ll put forth the nerd party just carried over.

I’d be remiss if I didn’t do some trailers with a few little bits of commentary. So here go!

While not an official Python movie,  it’s part of the greater creative team’s efforts.  And it’s got the style of humor and commentary on the absurdity of humanity. And invisibility cloaks.

Time Bandits for those weird and gonzo games.  But still as crazy as before. And while running a character funnel for Dungeon Crawl Classics I’ve been know to start singing:

The Pythons reach and influence is all over culture. Whether it Graham Chapman discovering a little know writer, Douglas Adams or inspiration to folks from Alton Brown to Eddie Izzard.  Like it or not, Monty Python does deserve a little seat at the game table.