Well, I’m still prepping to run The Blight and we were having a little table talk before the Labyrinth Lord game started last week. One player mentioned that he does miss 5E abit. So next time, we’ll have to nail things down. I’m expecting to start this after the holidays so with the speed I write stuff, Ill need the time. Another was excited that the setting isn’t so normal and asked if he could play something weird. So I asked, “Like what?” He replied, “I don’t maybe like some sort of were creature.” Hey, wererats are pretty key to the setting so I thought, “Why the hell not?” So here you go. 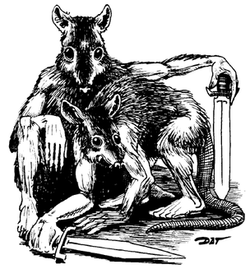 Swords & Wizardry Version
See in the Dark
+1 Save Vs Disease
Half damage from non-magical or non-silvered weapons. But double damage from silver weapons.
Bite (1d3) (Save Vs Disease to avoid Lycanthropy)
Cast Animal Summoning I (Rats only) Once per day
+1 Stealth (That’s with YARC Skill System).
Shapechange (Human/humanoid rat)
Suggested Classes: Fighter, Thief, or Fighter/Thief

Fifth Edition Version
Ability Score Increases: +2 DEX, +1 CON
Size: Medium
Speed: 30 Feet
Darkvision: 60 Ft
Damage Resistance: Bludgeoning, Piercing, and Slashing From Nonmagical Attacks Not Made With Silvered Weapons.
Vulnerabilities: Damage from Silver Weapons
Shapechanger. The wererat can use its action to polymorph into a rat-humanoid hybrid or into a giant rat, or back into its true form, which is humanoid. Its statistics, other than its size, are the same in each form. Any equipment it is wearing or carrying isn’t transformed. It reverts to its true form if it dies. Bite in Rat or Hybrid form does 1d4 damage. (f the target is a humanoid, it must succeed on a DC 11 Constitution saving throw or be cursed with wererat lycanthropy)
Keen Smell. The wererat has advantage on Wisdom (Perception) checks that rely on smell.

I based these, of course, on the monster stat blocks with some tweaking to make them a little more balanced. Of course, I may change this up later on, but this if the first version of this idea. And I’ll keep you all update on what the players decided. Swords & Wizardry or 5E. We shall see.

Or just check our products on Drivethrurpg or hard copies on Lulu.