Circumstances put me into place where there’s absolutely no gaming. Sure lot’s of folks are in the same or similar situation. But I’ve been totally idle on the gaming front. It’s a good time to sit back and plan about future campaigns. Our little group at least had a little time before every thing went crazy to do a little discussion. So I figured what the heck, why not share some of those crazy ideas on the old blog.
Cyberpunk Just for something different. Way back in the day, I ran the hell out of Shadowrun. I still have all my books. I ran a bunch of Cyberpunk 2020 too and have them as well. However, both of them have the same problem for my purposes. The hacking rules aren’t that great and it pretty much turns into one character going off on their own adventure while everyone else sits around and waits. The other problem is that there are so many options when it comes to gear especially weapons and cyberwear, that even character generation would take a couple of sessions. On the off chance of doing a straight up Shadowrun campaign, well, the magic system is cool but it’s probably going to be a pain for a modern newbie to learn. Once again. we’d be using old books so a player’s ability to their own copies would be limited. But hey if they really want to then I’m game.
We also talked a bit about Carbon 2185. This little gem is a 5E take on cyberpunk. It’s a pretty expensive PDF and the reviews have been good. But deep down I just don’t have a great feeling about getting that gritty cyberpunk feel with 5E. I’ve also got the old editions of Interface 0 for Savage Worlds. But once again, it just doesn’t hit the right vibe for me. 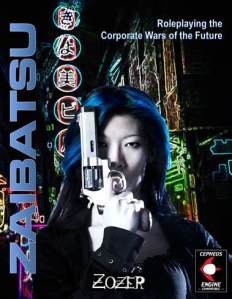 That leaves with the new gem that I found, Zaibatsu.I did a review of it a short while ago. In a nutshell, character create is pretty quick. Game mechanics are easy to learn. And the hacking game mechanics are pretty cool and quick. So that’s what I’m leaning towards but then I’ll see what the players say whenever we get back together.

Cthulhu I’ve had the urge to run a Cthulhu game for a while now. The “simple” one would be around Delta Green. But instead of all sorts of Federal Agents, I’m leaning towards something that’s more of a cross between Twin Peaks and True Detective (Season 1). But I’ve got other ideas.

Cowboys: I’ve thought about an Old West horror game for a while then I discovered Down Darker Trails and started listening to Ain’t Slayed Nobody. So Cthulhu is a natural choice. Of course there’s Realms of Cthulhu for Savage Worlds and it wouldn’t be that hard to add in the Old West elements to the game.

Pirates: Because everything is better with pirates. This idea has bounced around inside my head for years using Savage Worlds. There’s Tales of Solomon Kane, Pirates of the Spanish Main, and Realms of Cthulhu. I’ve got all those and it’d be easy to kit bash them together. But then I could also use Blood Tide from Chaosium.
For both Cowboys and Pirates, I’ve the idea to make the campaigns so that mortal vs mortal combat is slightl cinematic and not as deadly as the core CofC rules. But when the monsters come out they better run. So that’s why I’m leaning towards the Savage Worlds versions. There’s a few nobs and dials that I can tweak to make it like that. Of course, the CofC system is pretty simple and I do love doing house rules so maybe I might do some tweaking there.

There’s other ideas bouncing around inside my head but these are the major ones. And of course, we shall see
And remember folks. Sometimes the monsters kill you and take your stuff but still have fun.