I kicked back in my spare time and did a little binging. I couple of weeks ago I mentioned the failed Conan Red Nails. From what I could I find out, the production company just ran out of money but I was feeling nostalgic and just wanted to sit back and enjoy so I dug around the internet and started watching the old Conan the Adventurer. The animated one that is. I know there’s a live action one too and might rant about that one in a couple of weeks. 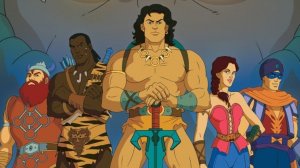 I’m about half way through the first season and well it is Saturday morning fare. There’s the obligatory annoying, comic-relief sidekicks for Conan and the main villain, Wrath Amon. Speaking of Wrath Amon. Doesn’t he look like he should be working for COBRA? 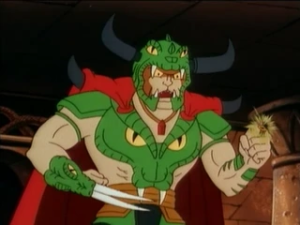 So here’s the gist of the series. Rocks fall and everybody wants them. It’s the “Star Metal”. It makes a mean sword plus our main villain wants it bring Set back. In the process, Wrath Amon turns Conan’s family into stone and our barbarian goes on a quest to reverse the spell and gathers a bunch of sidekicks along the way. Of course, Wrath Amon can’t take over the world all alone. He’s got an army of serpent men to help out. Yep, sounds like Kull story, The Shadow Kingdom. And that’s not the only wink to Kull. Early on Conan gets a mighty shield that once belonged to a might king of Atlantic, Kull perhaps. Of course being Saturday morning toon, there had to be toys. I mean that’s why they made the cartoons is to sell the toys. And there’s enough weirdo villains to full up your toy chest.
So what about the stories? A few things I noticed that the writers really snuck under the censors. Sure when Conan hits a serpent man with his sword, it just gets sucked up into the Abyss. Cause we can’t have the little ones seeing that. But I guess a city ran by cannibals is OK. Or that even on Saturday morning, Conan is willing to follow a dancing girl out the back door and down a dark alley. It’s not any real conversion of the literary works and softened up for the little ones. But that doesn’t mean it isn’t just a little bit of a guilty pleasure. Oh and of course there has to be catchy theme song.

2 thoughts on “Conan The Adventurer Animated”