I said that I talk about the other Pacesetter last week. And here you go. Yeah, I know I should have done this back in October when it was Halloween but hey I’m that kind of weirdo.  Now on with the show. Every time you see a discussion online about horror games Call of Cthulhu comes up first but somewhere along the line some mentions Chill.

We played a lot of Chill back in the day. Of course, many sessions were taken up by playing trying to finish up an adventure after a TPK. Yes, it can be that deadly.  Chill is your basic monster hunter game. Sure there’s psychic abilities and fear mechanics but the monsters are really, really tough if the characters didn’t do their homework. For a horror game, it was fun and different than fighting mind warping cosmic horrors just rip your face off “standard” monsters.  So yes.  I’m among those who do recommend it if you’re looking for a more traditional type of horror.

The characters do work for a secret organization but it doesn’t mean that get really cool gadgets.  Sometimes it felt more like Fright Night or Lost Boys. One of the highlights that I still remember is the players thinking that vampires can’t cross running water (some can, some can’t) so they surrounded a house with a garden hose and turned it on. Running water! Viola!

The basic game system is a percentile one-chart-to-run-the-game type systems.  Roll your dice, get your margin of success and consult the chart the outcome. That’s for everything even damage.  It’s fun and pretty easy unless you have someone in your group who is bad at math.

Chill wasn’t all by itself. Pacesetter put out a whole bunch of adventures and supplements for it.  Might I suggest one of the most fun. Creature Feature. That where you get to play the monster. And you’re not some brooding emo vampire.  You are a freaking movie monsters.  Heck, you even got XP for “playing with your food”.

Pacesetter put out more games that used the same basic rule system; most notably were TimeMaster and StarAce.  I admit that I bought TimeMaster and never played it.  It’s your basic time travel adventure game but I did play and run a bunch of StarAce.  So I’m going to talk about StarAce. 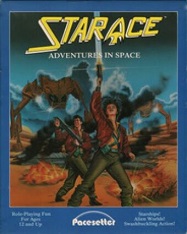 StarAce was a fun space opera style game.  Sure bits of it were Star Wars with serial numbers filed off but it did have some of it’s own wild weirdness.

Yes, polar bear aliens in Hawaiian shirts, crazy little green men, and lizardmen who forgot that most races can’t regenerate their limbs. While Chill was deadly (mainly due to the insane combat abilities of monsters versus mortals), StarAce was fun and cinematic.

So where can you get these games? Well, that’s where things get interesting. Pacesetter didn’t have a long life and their IP has gone all over the place.

If you’re looking for the original editions of Chill (renamed as Cryptworld), TimeMaster, or Sandman then Goblinoid Games is the place to go on DrivethruRPG.

But if you want the 3rd Edition of Chill then you have to join up the Salt Circle Games Patreon.

And the StarAce IP ended up with Ronin Arts. From what I can tell the only remain place to get PDF of those in on the Paizo store.

Of course, you can also hunt down copies of the originals some where.