So Erik over at Tenkar’s Tavern had a really cool post about using grids or not for battle maps. And just by coincidence I was thinking along the same lines. And as the old saying goes, a picture is worth a thousand words.
First is some ancient tiles I picked up way back when I was playing A D&D. I don’t even remember who made these. 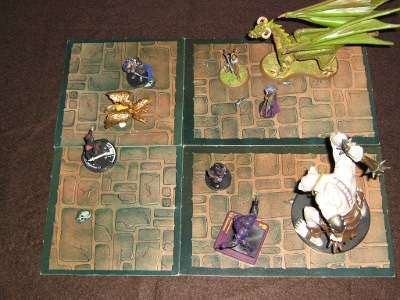 You’ll notice that I like using miniatures from various sources and keeping with one inch squares can cause a few scaling problems. Is that supposed to a “large” creature? 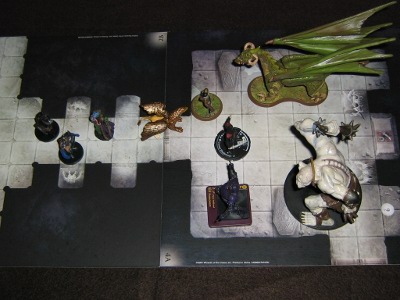 Like I posted before, I really like the Heroscape terrain but if I have to travel around it gets to be a major pain in the ass to lug around that stuff. 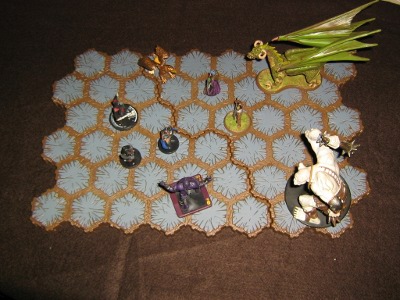 My favorite alternative is use felt. Like I said over at the Tavern. It’s cheap. You don’t need any special tools to cut it. It comes in a variety of colors. It’s light weight and easy to carry to a gaming session. 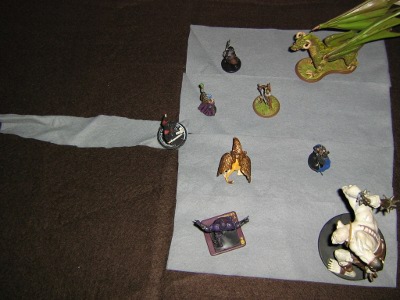 Lastly, one of the handiest things I’ve purchased is the Savage Worlds templates from Litko. 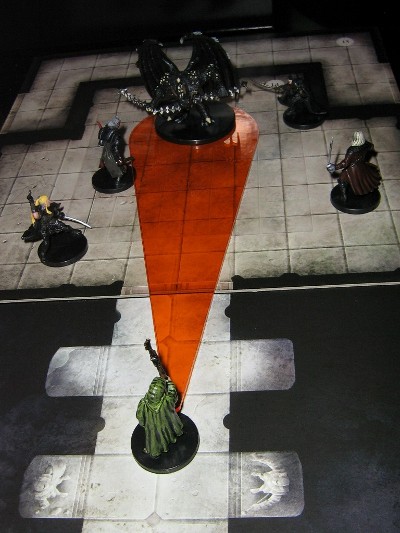 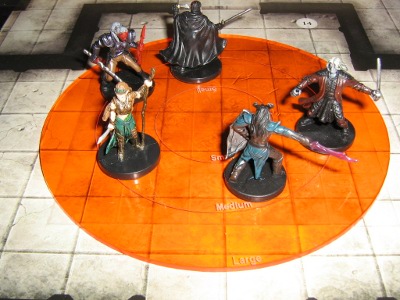 So there you go some pretty pictures of gaming stuff.

I was reading Lamentations of the Flame Princess and working on my own home brew game and I thought, “Damn, just how many classes do we really need?”
We’ve got the basic four: Cleric, Fighter, Magic-User and Thief. But how much do we need beyond that? I mean really. Isn’t a ranger just a fighter who knows how to live off the land? Isn’t a paladin just cleric with a really strong moral code and who is better at fighting? Isn’t a bard sort of a strange combination of all of the above? Isn’t an assassin a thief who is better at killing than trap finding?
Heck, with a decent mulitclassing system and an easy skill rules, I think you can get by with just four classes. Yeah, there can be a few more tweaks too. But I think you can get by with a minimal number of classes that each can be tweaked slightly to specialize and individualize the character.
So what do you think?

This crazy idea just popped into my head late last night. Here’s your challenge. Take your favorite Tome of Terrible Monsters. Pick your 20 favorites of varying HD and then build a little sand box based campaign around that.
Sounds pretty easy. Let’s face we have tons of books with hundreds of monsters. You don’t need all of them, all of the time. A whole cohesive little playground can be built around just a few. Just play around with that and see what happens. Enjoy!

Since this might the first some folks have noticed me I figured it would be time to do a little intro. I’ve been playing D&D since I first discovered that little White Box way back. I’ll put it this way. It was actually in print at the time. Over the years, I’ve messed with pretty much every edition as well as a ton of other RPG’s. And I’ve been blogging for a few years about RPG’s and other geeky stuff over at my other (The Geek Life Project)
I’ve kept up with most of the OSR blogs as wells later editions and Pathfinder but deep down I still yearned for those simple rules and crazy days. Guess, I was in the OSR closet for a while.
I’m not here to bash any edition or tell anybody you’re playing the wrong way. I just want to throw some stuff out there and see what happens. Some of it may be good and some of it might be utter shit. We shall see. And now in the words of many an immortal DM, “Just roll some dice and let’s kill some monsters.