The city of Malkuth is widely known as The City of Monsters which is a misnomer. The city isn’t evil but actually neutral to a fault. Any are welcome as long as they abide by the laws. Even the more civilized “evil” races need to trade and occasionally meet. The city is constructed in the caldera of a dormant volcano and extensive series of lava tubes provided a labyrinth passages beneath the city. The city is ruled by council consisting of the five most powerful clerics and the five most powerful magic-users in the city. 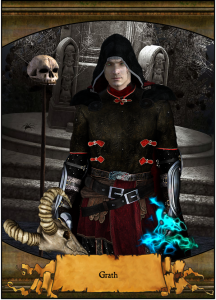 I’ve written about the Cult of Mordiggian before. Grath is the High Priest of Mordiggian in the city of Malkuth and the public face of the cult. The Cult of Mordiggian came to power in the city after the Temple of Tiamat was destroyed. Publicly, the cult deals with most of the funerary rites in the city and in secret will arrange for a body to permanently disappear. While not well liked, the cult is tolerated as long it doesn’t step too far out of bounds.
Grath is quiet and soft spoken. He is patient and an opportunist. While he is the leader of the cult, he uses it more for his own personal gain. He keeps the city’s udead population in check. He often acts as an agent for intelligent, free-willed undead who visit the city and counsel to necromancers. Despite the city’s tolerant attitude, Grath walks a fine line. His cousin, Sasha the Tolerant (High Priestess of The Church of 1,000 Saints), keeps him in check and tries to guide him in the right direction.

Last week I talked about this pair’s parents. This week meet the daughters of Ramona and Mycroft.

Daphne is the younger and much more impulsive of the pair. She’s highly intelligent but a bit naive and she’s not about acting more naive than she actually is. Her father has spoiler her a bit but this was mainly to only annoy her mother. She’s been know to cause significant property damage if she gets angered and feels she doesn’t get what she deserves. Daphne occasionally rebels against her parents but at most this lasts only a few weeks after which she goes back to live with her mother.
Daphne excels at and prefers direct damage spells and uses overkill as go-to tactic. She seems to care little about any collateral damage her spells cause.
Game Notes:
Race: Human
Class: mid-level Magic-User focusing on any spell that causes destruction.

Silka was always a great disappoint to her parents. From a young age, she was strong willed, independent, and showed little interest or aptitude for the arcane. She quickly fell into the “wrong” crowd and learned not only did she have an aptitude with a blade, she preferred the much more hands-on approach to dealing with problems. She quickly rose through the ranks of Garnax’s underworld and is the only non-Halfling to hold any position of power. She leads the Assassins’ Guild of Garnax.
Silka is as cold blooded as she is cunning. She’s rewards loyalty and competence and may dish out punish personally or send some poor sot on a “one way mission”. She does keep an eye on her little sister and occasionally intercedes when Daphne gets into trouble that’s over her head. Silka has no patience for her parents’ antics and has as little contact with them as possible.
Game Notes:
Race: Human
Class: Assassin with above average arcane knowledge. She can use Magic-User scrolls.

Mycroft and Ramona are two of the most powerful magic-users in Garnax and they’re married but not happily. It all began as a romantic youthful fling. In the beginning, it was nearly a fairy tale marriage. The pair had two daughters, Daphne and Silka (more on them later). But quickly they became professional rivals which escalated into personal animosity. Mycroft’s indiscretions didn’t help either. Both are willing to use their own children or the random adventurer to annoy the other.
If Mycroft hadn’t taken up the arcane arts, he would have probably made a living as a con man. He’s not above using his magic to get what he wants but he finds it much more “sporting” to use his own charm and wit. Mycroft is living the life of a man half his age; wandering from one city to another when he gets bored. He spends as much as time as possible away from Garnax and Ramona.
Ramona is very studious and disciplined. She’s reputed to be one of the top experts on arcane lore and magical artifacts. Not all of her knowledge has come in the form of ancient tomes. She is quite adept at summoning and much of her knowledge she gained from extraplanar beings. There are many much darker rumors about what she has summoned and what she has traded for forbidden knowledge.

How about some inspiration?

Every major city has a thriving Thieves’ Guild and Garnax is no different. The head of the Garnax Thieves’ Guild is Boss Trotter which he rules with a bloody iron fist. He keeps control of the Guild by placing only “family” (i.e. halflings) members in key positions of power and responsibility. )There is one exception but more on that NPC later.) While he has scars from many fights, he always dresses in the finest of clothes.
Boss Trotter’s gang doesn’t pay too much attention to larcenous activities as long as they get their cut. Most of the Guild’s and Trotter’s wealth and power stem from loan sharking, blackmail, extortion, and protection rackets. (This has lead to some rather interesting roleplaying when a country bumpkin halfling PC walks into a shop and the shopkeeper is scared out of his wits.) The only person Boss Trotter shows a healthy respect for is Lady Vasha of the Night Market.
He’s rarely seen in public but he still doesn’t mind getting his hands dirty. Any one warrants his personal attention is “invited” to his manor and probably will face a long and painful death. Boss Trotter is as cunning as he is cold blooded but sometimes his tempter gets the best of him leading to usually violent outbursts. He is quick to assess opponents and come up with creative means of dealing with them with as little risk to himself.
And yes. I fully admit that I got the original idea from Fineous Fingers for a halfling thieves’ guild.
Game Notes:
Race: Halfling
Class: Fighter/Thief
Roleplaying Tip: A picture is worth a thousand words. 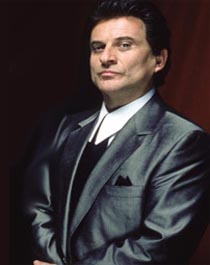 NPC Portraits created with ePic Character Generator. I did a lot of editing on this one.

It time to do another NPC.
During the day, the market square of the great city of Garnax is bustling with tradesmen and merchants. When the sun falls below the horizon and the butchers, bakers, tailors, and others close up their stalls and head to their homes, the Night Market takes of the plaza. The Night Market were astrologers, alchemists, and sages ply their trade. All manner of arcane, obscure, and even profane ephemera is for sale at the Night Market. Lady Vasha has made this her domain. She moderates disputes between merchants, and between merchants and customers. She passes judgement on would-be thieves and pickpockets. Her punishments for thievery are especially brutal. So much so that even the local Thieves’ Guild has put the Night Market off limits.

Lady Vasha’s pavilion is at the center of the Night Market and she is never without her retinue. Her Seneschal is a tall, gaunt mute half-elf seer. He is never seen without his Tarot deck. When anyone wishes an audience with Lady Vasha, they have to go through him first. He will assess the petitioner, draw a card then decide if they shall gain the audience. There isn’t any appeal. For those poor souls who attempt to push their way through are meet by Mordo. Mordo is a hairless ablino dwarf and totally psychotic. While he swings a very mean axe, his favored method for finishing off an opponent is ripping their throat out with his teeth. He is usually sitting at Lady Vasha’s feet, munching on a bowl of raw meat.
While all manner of magic items are available at the market, Lady Vasha buys up the best and most powerful for herself. There are some she is willing to part with for the right price or those who are willing to perform vary dangerous services for her.

Game Notes:
Race: ? There are some rumors that Lady Vasha has an extraplanar origin, others insist she is udead, merely human working her way to lichdom or something greater.
Class: ? More than likely a powerful spell caster but she is rarely seen casting any spells but will do so without hesitation. She has extensive arcane knowledge.