It’s that time of year. Most everybody does it and take it as time to get back on track and set some goals and make some plans for next year. So I go into a whole long rant in this week’s episode. You can subscribe on most platforms or just stream it here.

But here’s the highlights:
Cool stuff this year goes to Old Skull Publishing (and his great games Sharp Swords & Sinister Spells, Dark Streets & Darker Secrets, Solar Blades & Cosmic Spells). Also Old Essentials from Necrotic Gnome wonderfully organized and easy to use take on BX D&D. Then there’s Goodman Games. DCC Lankhmar. Hell yeah! And Frog God Games. Great Kickstarters like Tegel Manor and small print run Indiegogo campaigns for some neat adventures. And then there’s Skeeter Green and his new entry into publishing.
And then the misses of the year. Oh Ref Book where art thou? I’m not going to spend a lot of complaining. I just don’t care about it any more.
So now on to what I’m planning. First, expect more of the same here at the old blog but probably with more Swords & Wizardry. For Playing It Wrong, also expect more of the same but with more food and humor because blackjack and Hookers are just too expensive.
I’ve got some minor tweaks to do on the Patreon. That should be done before the end of the year.
I plan on doing about one video a month on the Youtube channel. Some reviews/unboxings and maybe a few little crafty/DIY type things.
Discord. Well. I keeping forgetting about that. I’ve tried to set aside a time for that. So instead, I’ll just be a random encounter there. I’ll show up and see what’s going on. Yes, I’m behind on the old production schedule this year but that means the end of the year is going to see a whole flurry of activity. So here it it my own little supplement/fanzine for Dark Streets and Darker Secrets.
Back Alleys has three new archetypes (The Chosen One, The Average Joe, and The Face). Some nasty artifacts like Grandma’s Butcher Knife and the Necromonicon Ex Dementia. Plus a host of monsters inspired by some classic horror movies.
Enjoy! You can find it right here on DrivethruRPG.

So I’m working on a little supplement/fanzine for Dark Streets and Darker Secrets. The current working title is Back Alleys. So I figured I share a little preview of one of things coming up. 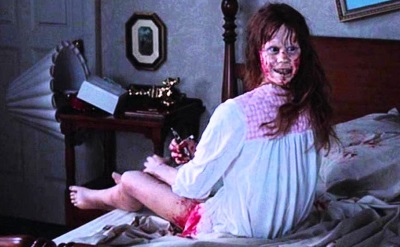 Possessing Entity
HD: 3+
Special:
Damage Resistant: When a Possessing Entity is inhabiting a host, it (and the host) take half damage from mundane attacks. If the entity is expelled/exorcised then it is immaterial and immune from damage from mundane attacks.
Possession: The entity may take over the body of a mortal and inhabit it. Can be resisted with a successful WILL Test.
Poltergeist: The Possessing Entity may hurl loose objects doing base damage based on its HD. A successful AGILITY Test halves the damage.

Exorcism
A New Gift/Ritual
Exorcism is an exhausting ritual that takes PL Hours to cast. It will expel a Possessing Entity of PL HD. The Entity may resist with a WILL Test (assume 10+HD Willpower). If the caster increases the PL above the Entity’s HD then the Entity resists as per the Powerful Enemy rule.

Right now, I’m working on three new archetypes, some magical artifacts and host of horrors to disembowel the player characters. And yes there’s something for Solar Blades & Cosmic Spells but more that later.

So even more rants on New Bay City and Dark Streets & Darker Secrets. This week I want talk about Black Magic and Haywire. Both of these are standard tropes. How many times have read/heard something like vile arcane rituals? How about the characters are running away from the monster and the car doesn’t start? Both of those are examples. It’s not secret that I’m a fan of the Dresden Files and both of these things figure prominently in the books.
Now, Black Magic doesn’t need too much of tweak. There’s already plenty of Gifts that cause automatic Corruption or Sanity loss. However, (just based on my own interpretation) a few more should have that caveat. Namely, Cannibalize and Transfer Life. Of course, there may be more but that should be based on the Concept being used for the Character and for the Gift.
Now on to Haywire. Yes, this plays big into the Dresden Files. I also remember from Pacesetter Games’ Creature Feature. So I’m approaching this two ways. First, Gifted Characters that don’t have the Haywire Gift. It’s just a form backlash. Screw up a spell and trash everybody’s cell phone, laptop. or whatever high tech device happens to be around. And there’s the actual gift.
Haywire
This gift disrupts the use of high tech devices within medium range for PL turns. Maybe resisted with a successful Luck check.

Pretty simple actually and I’ve got a few more random thoughts to throw out there. So this campaign might be postponed a bit. We do an alternating GM thing in our group. One GM one week, then the other the next. It works and helps reduce GM burnout. But one thing we do is avoid very similar campaigns. That’s so the players don’t get confused about what’s going on and keeps the games and genres fresh. So he’s wanting to run Scion. And folks are pretty excited about it. So this may get postponed a bit. But that doesn’t mean my ideas will. So stay tuned for more. And it just may mean I start blogging about my brainstorming for another campaign.

If you’ve been following along I’m converting/resurrecting the old New Bay City campaign for Dark Streets & Darker Secrets. The first time I ran this setting it was with World of Darkness then I ran with the Dresden Files RPG. Each time I’ve made some tweaks to the universe based on the game mechanics. This time it ain’t any different.
Vampires and Werewolves are pretty much stock creatures and sometimes even player characters. One of the things that they usually have in common is that they were once regular mortal humans and then something happened. Some fight against their respective supernatural natures and others may relish or even be consumed by it. Plus each of these types has a buckets of folklore attached to them. So how I am going to throw this into Dark Streets & Darker Secrets? Corruption.
OK, I already did a rant on expanding the Gifted Class and in a way this is an expansion on that. Lets’ take a very common example and run with it. Vampires and sunlight. In most games/factions, young vampires poof if they even smell sunlight and older/ancient vampires can tolerate it. In this iteration of New Bay City, the opposite is true. That young (low level/HD) vampire has some of the strengths but those weaknesses are the result of Corruption. A Vampire has lots of hang ups that probably means that they are a bad ass and be thankful for those weaknesses. However, that extra that plays into why there is so much different lore out there. Each is sort of unique in their set of disadvantages.
This is only something that would apply to the “Blooded” types as I rambled about in The Gifted Expanded post not anything that’s purely supernatural. I may do some specific charts but I also grabbing something that seems most appropriate to the specific situation when things go horribly wrong. So here’s the lists of that I’ll be using for inspiration by type. And is no way complete and other changes/tweaks will be based on specific characters.
Vampires: Animal Antipathy, Aversion Holy, Addicted Blood, Allergic Sunlight, Allergic Garlic, Need to be Invited, Aversion Mirrors, Smell of the Grave/Cadverous.
Werewolf/Lycanthrope: Animal Antipathy, Allergic Silver, Addiction Raw Meat, Full Moon/The Beast Within, Feral Appearance
Changeling: Allergic Cold Iron, Need to Tell the Truth, Aversion Holy, “Alien” Appearance.
Cambion: Animal Antipathy, Aversion Holy, Addicted to Sin, Smell of Brimstone, Demonic Features.
Nephilim: Overzealous Virtue, Aversion Unholy, Angelic Features.
And that’s this week’s rant on New Bay City. Enjoy! Oh and here’s my scribbled map of New Bay City. 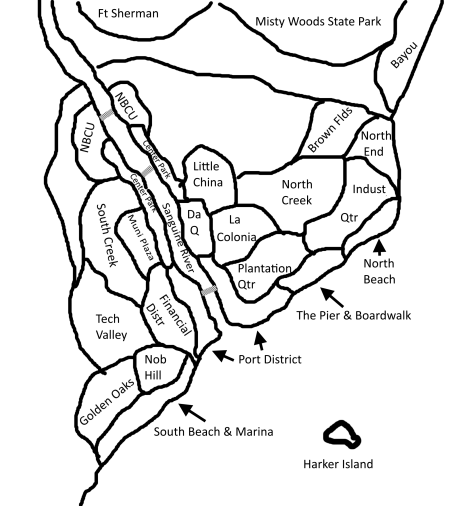