Well, up this week is Low Fantasy Gaming. Ive already done a couple of more indepth reviews of the Free and Deluxe editions. It’s a damned good game and bears another rant in this series. 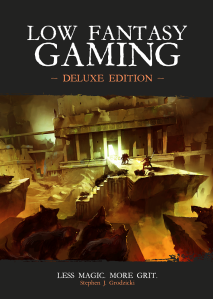 First like many others, it doesn’t attempt to emulate a specific old edition. Instead it takes a lot of the best various editions and retroclones and throws them together in a coherent and fun game. Low Fantasy Gaming takes a much more Sword & Sorcery approach than High Fantasy. Magic is dangerous. The world is a little rougher and tougher. You know the drill.
Low Fantasy stands on its own as a game but of all the one’s I’ve ranted about so far, it does have the most amount of material that can be imported into your game of choice. The Dark and Dangerous Magic system and random charts are a fun and simple additional. Luck mechanics. Yep. Got those too. And the neat thing is the “Unique Feature” for player characters. In a nutshell, take some feat or feature from another game and convert it. It sounds simple but it’s the easiest way to customized characters without having a long list of specific abilities. Like I said, it’s a really nice addition to any game.
The classes are all geared more towards the Sword & Sorcery vibe. Instead of Clerics, there’s Cultists which are handled in a much neater way. Instead of normal spells and such, the Cultists has Blessing plus specific benefits and restrictions based on their god. Sure most of the Blessing do emulate the most common Cleric spells and abilities but they are handled differently than the standard pseudo-Vancian cleric magic. Races are pretty much the standard except for Half-Skorn which are basically Half-Orcs.
If you haven’t added this your collection, I highly recommend it. You can grab Low Fantasy Gaming at DrivethruRPG. If you want to just check it then there’s the original Free PDF available.